On October 20, 2017, 10 people from the Cornwall Friendship Force club visited Washington, DC, and several members of our club spent the day with them. We met at the Smithsonian Metro Station at 9:30. Karla Timmons and Helen Cassidy helped Anne and Tod Herrick, who organized the day’s activities. 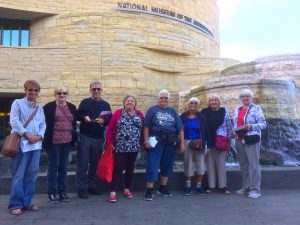 We divided up, with some of our group going to the Air and Space Museum and the rest going to the National Museum of the American Indian. We could have spent more time exploring the museums. 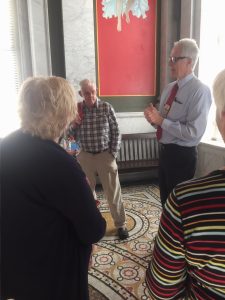 After grabbing a quick bite to eat we all made our way to the Library of Congress for our 1:00 tour. This tour was a fascinating discussion of the history of the institution and the architectural features. Following the hour-long tour, we viewed the displays of the Jefferson Library, mapping the new world and courtroom drawings on our own. 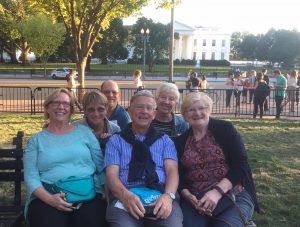 Part of the group met for a photo in front of the White House.

We planned to meet at the front of the White House for photos at 5 p.m. However, when we arrived we found a couple of people at the front and the rest of the group missing! Apparently, they all went to the other side of the White House and took pictures in front of the Rose garden. That was the most recognizable view for them from all of the pictures. 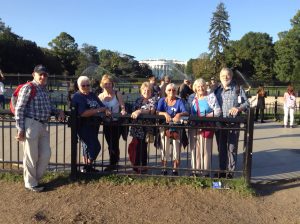 The rest of the group found the Rose Garden side of the White House.

We then walked to Woodward Table where we had reservations. We had our own section and had a lovely dinner together. There was much laughter about being on both sides of the White House and not knowing the other group was there!

The group decided to shelve the night-time stroll around the monuments as it was late and we were all tired, so we escorted the Cornwall group back to the Metro to return to their hotel.

It was a fun day!